VJLAP CLE on April 8th: Depression and Suicide – How the Legal Profession is Impacted 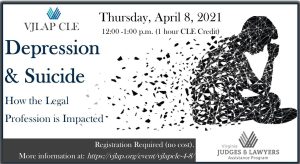 Depression and Suicide: How the Legal Profession is Impacted

This CLE will review the signs and symptoms of depression and suicide, debunk the myths surrounding suicide and suicide prevention, provide skills for approaching a colleague who may be experiencing problems with depression or contemplating suicide, and present tips for de-escalating and managing a situation where you are concerned for yourself, a colleague, or a client.