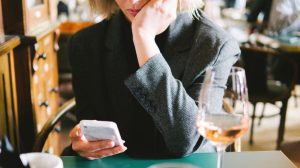 Specifically, it found women attorneys have a higher prevalence and severity of depression, anxiety, stress, risky and hazardous drinking, and attrition compared to their male counterparts. 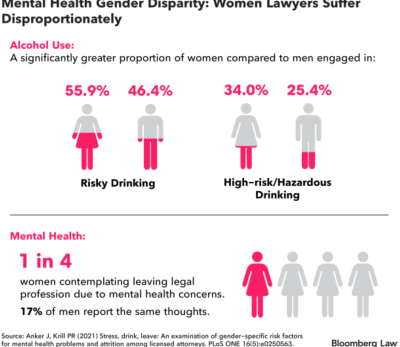 The study also looked beyond prevalence data; it looks at the predictors of those factors that have been shown to negatively impact the legal profession. Several occupational factors were found to significantly contribute to these problems. Women’s responses demonstrated a greater level of effort needed to elicit reward at work when compared with men, significantly higher levels of over-commitment and work-family conflict, and a lower likelihood of promotion

“Overall, findings from the present study suggest that levels of mental health problems and problematic drinking continue to be quite high among currently employed attorneys. Women experience more mental health distress, greater levels of over-commitment and work-family conflict, and lower prospects of promotion than men in the legal profession and are more likely to leave as a result,” the article concludes.

The authors note their survey occurred during the COVID-19 pandemic–though they made efforts to assess how COVID-19 might have impacted their respondents within the survey as well as in their results overall, there are still likely unaccounted effects of the pandemic present. They also note their survey did not ask about help-seeking in respondents; however, the results still clearly indicate mental health problems, alcohol misuse, and gender disparities are significant problems in the legal profession.

If you are experiencing or are concerned about a colleague who may be struggling with mental health and/or substance use concerns, VJLAP is here to help. We are here 24/7 to help, provide information, or just listen.